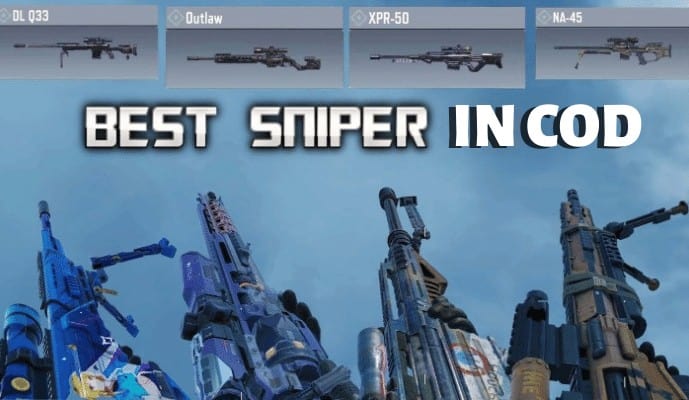 Ever since I started playing Call of Duty, it has been a dream to review the famous sniper rifles and share my views on these weapons. I personally love using Outlaw and SVD because of their fast firing rate and deadly damage.

However, recently I have come across the DL Q33 and have been left impressed by this weapon. Thus, I decided to develop my list of the best sniper in COD mobile along with their loadout attachments and firing sensitivity.

The SVD is relatively faster than the majority of the other sniper rifles available in the Call of Duty mobile version. One of the best features of this weapon is its ability to take out multiple shots at a time without taking many breaks in between.

This is highly useful as it does not give the chance to your enemy to counter-attack and offers you a competitive edge. In addition to this, it also reduces the general time required for attack when compared with other rifles or machine guns in the game.

The best load-out attachments for Dragunov Sniper Rifle famously known as the SVD include the:

All these weapons will not only improve its damage range but also enable you to achieve excellent accuracy and improved speed.

M21 EBR also has an advantage over its other counterparts in terms of the shooting rate as well as the accuracy. This weapon also features a relatively fast fire rate and therefore, can be used to hurt the enemy greatly by firing in multiple successions.

However, in terms of damage, this particular sniper lags behind others and has a relatively low damage rate. But it is highly recommended if you are not particularly concerned about the damage and want to lure your enemy into a trap as it allows for fast-speed movement.

The loadout attachments for M21 EBR are as follows;

All of these attachments help in improving the overall accuracy as well as the firing rate of the weapon.

DL Q33 belongs to the category of the S-tier sniper rifles and is definitely the top sniper in Call of Duty mobile. The weapon comes with exceptional accuracy and a consistent damage rating across a great distance. Furthermore, it also possesses a decent fire rate and is one of the outstanding bolt-action rifles.

If you are searching for the best loadout attachments for the DL Q33, then I highly recommend going for the following;

Using these will help you achieve high accuracy with exceptional damage output.

The Arctic is another outstanding weapon in the Call of Duty mobile and is often referred to as the king of sniper rifles in the battle royale. The weapon is highly recommended for single-player mode and has a fire rate of 31. Moreover, it also features relatively high damage ratings and long-distance accuracy.

Some recommended attachments for Arctic.50 include:

Setting up these attachments with the weapon will help in increasing the damage, range, accuracy, and fire rate.

Next up on the list is the Locus which is often characterized as the all-rounder sniper that you will find in the COD mobile version. In general, this sniper does not stand at the top in any category when viewed or assessed individually, but, on a whole, it is an all-rounder and displays significant participation in different categories, which sets it apart from its other competitors.

The best load-out attachments for Lotus include the;

These attachments feature relatively higher damage ratings and can be used for long-distance combat.

Similar to the DL Q33, the outlaw also belongs to the category of S-Tier snipers in the COD mobile. Now the best feature of this sniper rifle is its relatively fast nature, which makes it the top sniper in the mobile version of COD. Unlike ordinary snipers, you will observe that this version features the fastest ADS and movement speed.

The best loadout attachments for outlaws in the call of duty mobile version include;

Since the outlaw is characterized by increased movement speed, you will not have any issues shooting your enemy with utmost accuracy even when you are running.

What is the best sniper in call of duty mobile?

SVD is considered the best one of the weapons available in call of duty mobile. This is because of its high damage ratings, fast fire rate, and exceptional accuracy, which makes it stand out among others and all enable you to take an advantage over your enemy by firing out multiple shots.

What is the fastest sniper in COD Mobile?

The outlaw sniper rifle is considered the fastest sniper in the COD mobile and displays outstanding firing rate and movement speed. Additionally, it is also characterized by the fastest ADS and is a perfect option if you prefer killing your enemies while moving on the map.

Call of Duty Mobile has launched various outstanding snipers in the past few years all of which offer tough competition to each other in terms of fire rate, movement speed, and ADS. This article has reviewed the six of these sniper rifles in terms of their ADS speed, fire rate, and damage ratings along with the best loadout attachments for them.